If you grew up in this area, you may not remember your first visit to the Bottle Inn. They were probably too young to drive or legally taste anything from the wine list, a kid in nice clothes going out to dinner for mom and dad’s anniversary or a milestone birthday. In the beginning it was a “continental” restaurant serving American-Italian and pseudo-French dishes. Couples who dated there and returned for anniversaries saw a gradual shift towards more authentic classic Italian fare. The cozy, dark restaurant stayed in that style for five decades, and if towards the end of that time the place was looking a little worn and dated, the soft lighting and plentiful wine made it easy to ignore.

In 2017, the restaurant changed hands, but not the culinary style — a team led by Hilary Condren took the reins, and Oscar Arellano, who had been maitre’d for over 20 years, stayed on as chef and partner. The restaurant received a subtle but much-needed makeover that made the style classic rather than rustic, and a new bar added liveliness to the front space. During the pandemic, they struck an agreement with Martha’s across the street to use their outdoor patio and more than double the amount of outdoor seating, which has proved popular. However, this worried me. Some restaurants that are increasing their seating are struggling with long delays, cold food and other consequences. Bottle Inn’s kitchen has always been small and oddly decorated – could the kitchen team rise to the challenge? In an environment where every restaurant struggles to find waiters, would they have to rush guests or struggle to get all orders to a table at once?

The only way to know was to learn through experience. As nice as the outdoor seating looked, it was a hot evening and the air-conditioned interior was inviting. We sat in the cozy and relatively quiet booth at the back of the restaurant. A waiter brought food and wine menus followed by garlic toast. Garlic toast as we know it is unheard of in Italy, but it’s addictive and filling too, so I only have one slice at a time until other items arrive.

We ordered Caesar and quinoa salads for starters, along with an order of meatballs. The Bottle Inn thus remains true to the Italian tradition. Layering giant meatballs over spaghetti is a New York thing, but in Italy, small meatballs with a little tomato sauce and cheese are a popular appetizer. They’re a mix of beef and pork, and topped with mozzarella and Reggiano Parmesan cheese, with some crunchy kale on the side. I ate meatballs in Sorrento which tasted very similar and will happily have them again.

The Caesar was the traditional dish, very well done with a robust but balanced dressing, while the quinoa was a modern anomaly on an otherwise traditional menu. It’s not too different from southern Italian salads, which include grains along with vegetables, toasted almonds, and vinaigrette, but these typically don’t include toasted corn. The two new world grains fit seamlessly into Italian tradition when it comes to taste, and while innovation isn’t what the Bottle Inn is known for, it shows they do it well.

With our starters we shared a bottle of Soave wine from a producer named Pieropan. Soave is a white made near Venice and has lots of stone fruit and floral notes. It’s a nice summer cooler. It’s not a wine I usually order, but this bottle made me want to explore the style further.

Despite contemplating the seafood and meat appetizers, we ordered three pastas. Usually when I visit a place with a review in mind I try to get as many different things as possible but pasta is mostly what my companions visit the Bottle Inn for and pasta they have. These were spaghetti carbonara, linguine e polli al cartoccio, and “fesa di pollo,” a mashed chicken breast that’s fried and then topped with angel hair pasta, garlic, tomatoes, and spinach. And yes, the fesa di pollo is listed in the chicken section of the menu, but the chicken is a platform for the pasta. The breading on the chicken was moist rather than crunchy thanks to a garlic and herb sauce with broth, but the flavors combined were excellent. 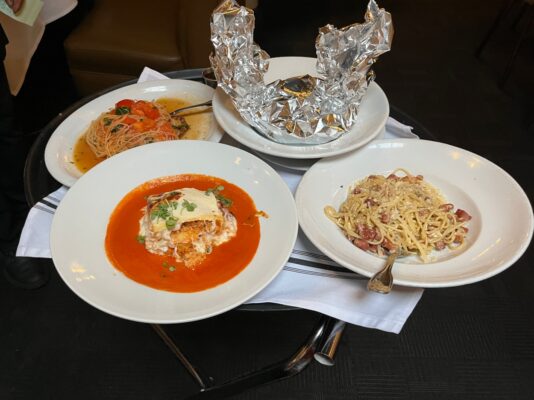 The carbonara was the real Italian version, done right, without the cream, the richness of the sauce thanks to the raw egg yolks being added to the pasta when it’s hot and stirred briskly with the cheese, pepper and pancetta. When done right, letting ingredients speak for themselves is a triumph, and it’s definitely right here. The linguine dish is far more complex, the noodles tossed with chicken, artichoke, spinach, mushrooms, chives, roasted garlic, olive oil and tomatoes, then wrapped in aluminum foil and flamed with brandy at the table. Flambéing with brandy is not about adding the alcohol flavor alone or just to add to the show. The liqueur intensifies herbal flavors because the alcohol extracts them and adds a slight smoky sweetness. It wasn’t my favorite piece at the table, but it was an interesting one worth trying. 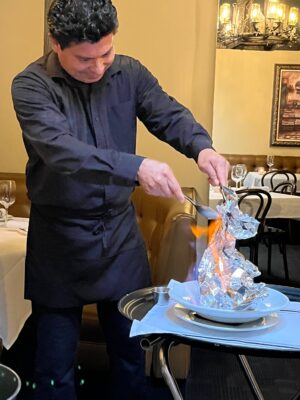 I chose the chicken polenta lasagne, a product from the Campania region around Naples. Polenta was historically the food of the very poor, and this may have been a way to replace more expensive grains with a cheap ingredient. It works remarkably well because the thin sheets of corn dough have a sweet vegetable flavor that goes well with fruity tomato sauce. The portion looks small but is quite filling and I may have to try it a few more times to see if I really like it better than the wheat noodle version.

The Bottle Inn has won Best Wine List many times in our readers’ poll, and it’s not just because they have lots of expensive Brunellos and similar library items. To complement our starters we chose an Otto Barbera’ d’Asti, a very good wine at a modest price. It is moderately tannic with lots of fruit, slightly deeper and more complex than typical Chiantis. We were very happy with it.

We knew we would be leaving with leftovers because the portions of pasta were very generous, but we had to try desserts. I surprised my wife by not getting cannoli, my usual favourite. . We ordered chocolate mousse cake, limoncello lemon cake, tiramisu and white chocolate cheesecake. My companions had ordered the cheesecake and lemon pie, and I braced myself for the overwhelming sweetness of both, but was surprised. The limoncello cake was lemony, but also had some flavor of lemon oil and zest to balance it out, and while white chocolate isn’t a favorite flavor of mine, this cheesecake used it as well as I can remember. The chocolate cake would have been my favorite, except the tiramisu had the perfect balance of sweet cream cheese, dark chocolate and coffee, as well as vinous flavors. I’m picky about this dessert and I’m perfectly happy with the Bottle Inn’s version.

Our meal was planned leisurely, but we had none of the issues that had worried me upon arrival. Everything was done as well as ever and arrived hot and the waiters took their time with us as we ordered and never seemed rushed. Our meal of three appetizers, four entrees, and two bottles of wine was about $70 per person, modest for an upscale meal at a beachfront landmark. Anyone wondering if the Bottle In was in good hands can relax and should come back as it’s everything you remember, but better.