“Within a Mashie-Niblick” of the 18th green at Muirfield Golf Club lies a garden of great beauty and history, as James Truscott explains.

“If only walls could talk.” Nowhere does this seem more appropriate than in the gardens of Greywalls, East Lothian, where the walls themselves hold the key to the gardens’ history and origins, their innate character and their continued survival. They not only tend and enclose the Garden of the Salty East Winds, but reveal their story to the audience, as if choreographed by a master playwright, scene by scene, until finally, in the final act, they tell the whole plot of land is uncovered.

The playwright in question was Sir Edwin Lutyens, whose designs for the garden were planted by Gertrude Jekyll. At Greywalls, the unity of design is enhanced by the use of the local honey colored ‘Rattlebags’ stone to build both house and garden walls; and it is the gray Dutch pantiles used on the roof and crowning that give Greywalls the ‘gray’. 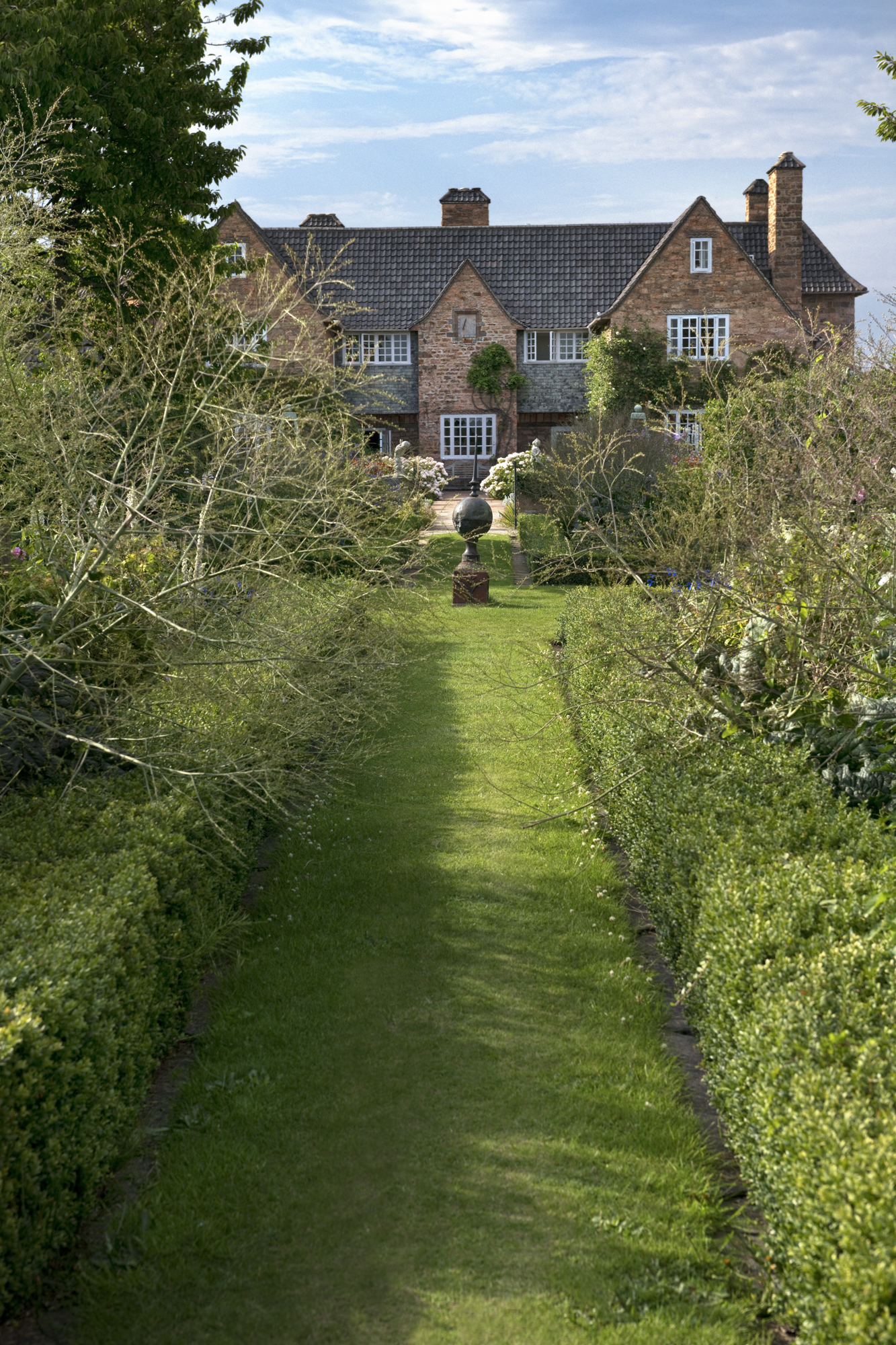 Greywalls, described by Sir Lawrence Weaver in his 1913 book Houses and Gardens by Sir Edwin Lutyens as “…a small if dignified holiday home”, was built in 1901 for the Hon. Alfred Lyttelton, a keen golfer determined to living “within a Mashie-Niblick shot of the eighteenth green in Muirfield”. At seven acres it was a small property by Edwardian standards, but Lyttelton wanted to create the feel of a large estate.

The illusion of space begins at the front gate, where an external vestibule reveals to the confused visitor a choice of two gates, each at a 45 degree angle, with a large servants’ house in the foreground and a smaller lodge on either side. This immediately gives the impression of entering large areas, based on the (erroneous) assumption that they extend to the right as well as to the left. It probably appealed to Lutyens’ whimsical sense of humor to think of confused first-time visitors who accidentally take the right-hand entrance and end up in the garage. 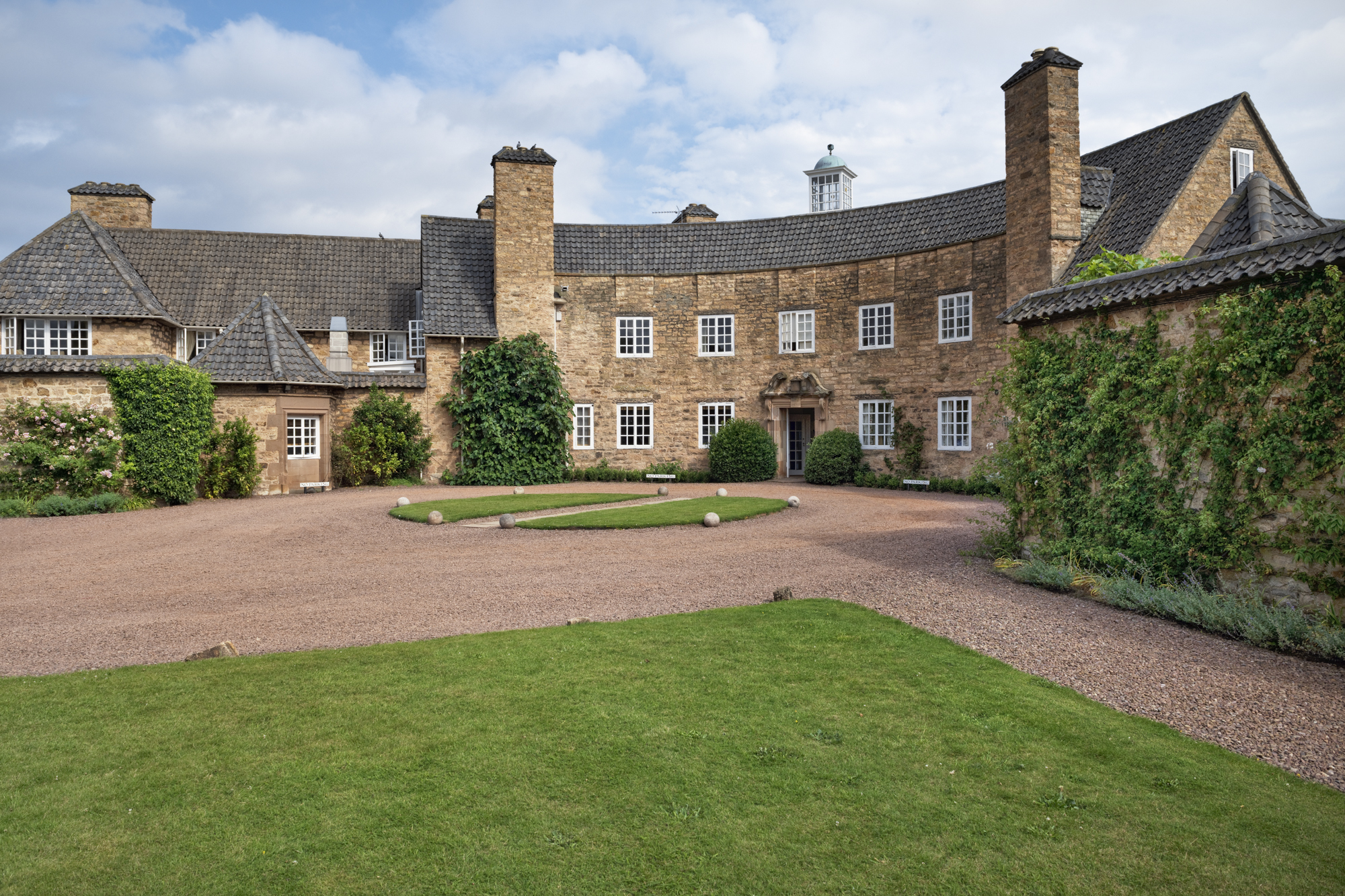 However, if you take the left gate you enter a large circular courtyard surrounded like a vast open stage by gated stone walls with a lawn bisected by a central gravelled driveway. This leads the eye straight to the front door of the two-storey stone house, which with its concave facade seems to form an integral part of the circular stone walls that enclose and enclose the space.

The elegant simplicity of this entrance courtyard garden, with gates to the left and right, once again gives the impression that the site extends equally on both sides, while on the left there is only the former gardener’s house. Although Lyttleton’s grandiose ambitions for Greywalls were fully realized by Lutyens, the MP’s tenure there was relatively short and in 1905 it was sold to Scottish socialite Evelyn Forbes and American husband William Dodge James. One of their most famous guests was Edward VII, hence the nickname given to one of the rooms overlooking the garden: King’s Loo. 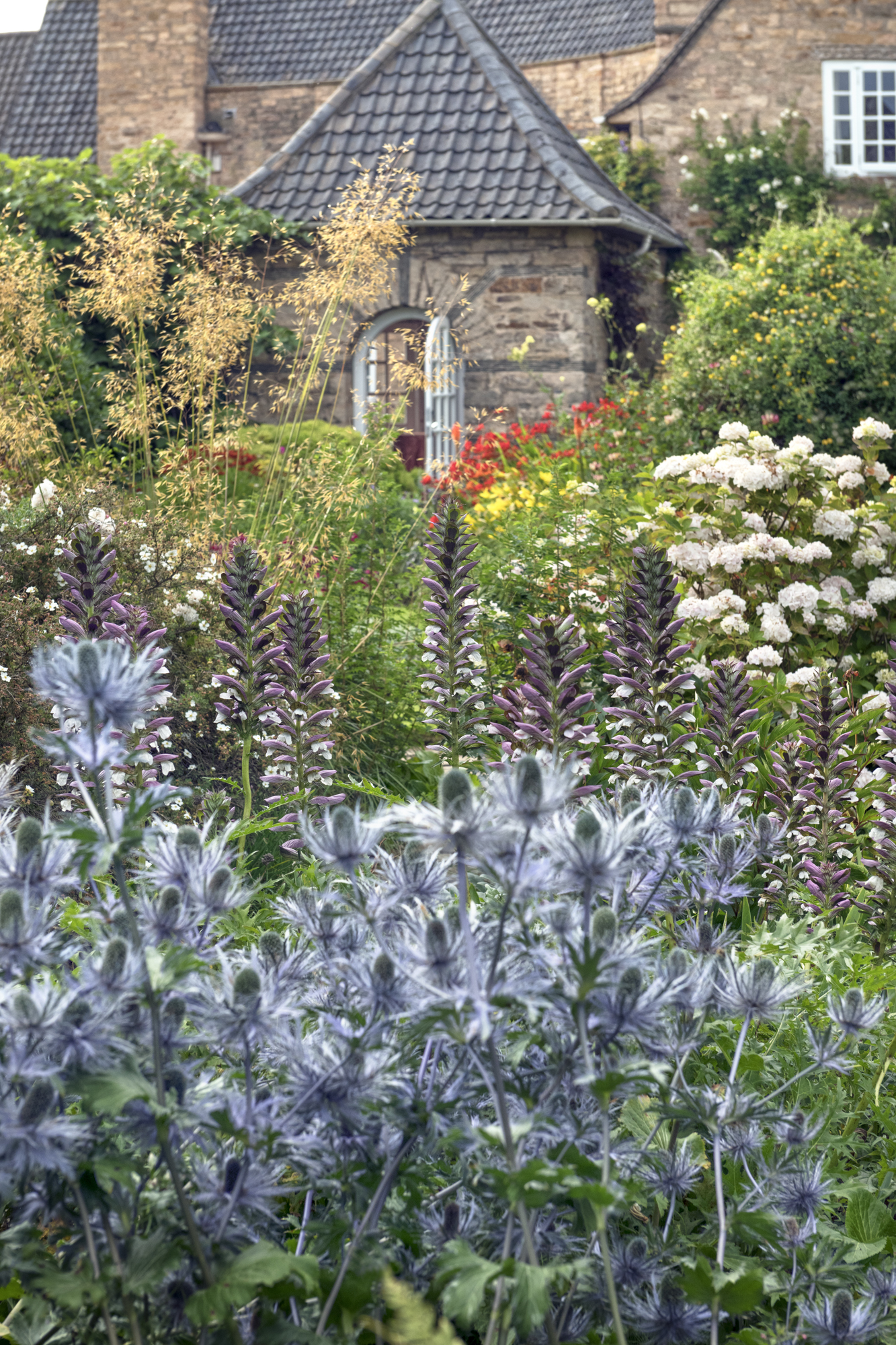 The gardener’s cottage is now the home of Jo and Dominic Hoar, daughter and son-in-law of Ros and Giles Weaver, with whom they now co-own Greywalls. They inherited the home from Giles’ parents, Colonel John Weaver and his wife Ursula, who converted it into a hotel in 1948, and it remains to this day. Ros still runs the garden but the hotel is run by a management company while Albert Roux takes care of the catering. Giles grew up in Greywalls and has happy childhood memories of playing in the gardens. A companion from back then is a house turtle that was won at a fair in 1926 and still lives in the garden despite frequent breaks in freedom.

Behind the house is a small sunken lawn that is exposed to the elements and offers panoramic views of the Muirfield Golf Course and the Firth of Forth. It acts as the perfect foil for enclosing Walled Gardens. 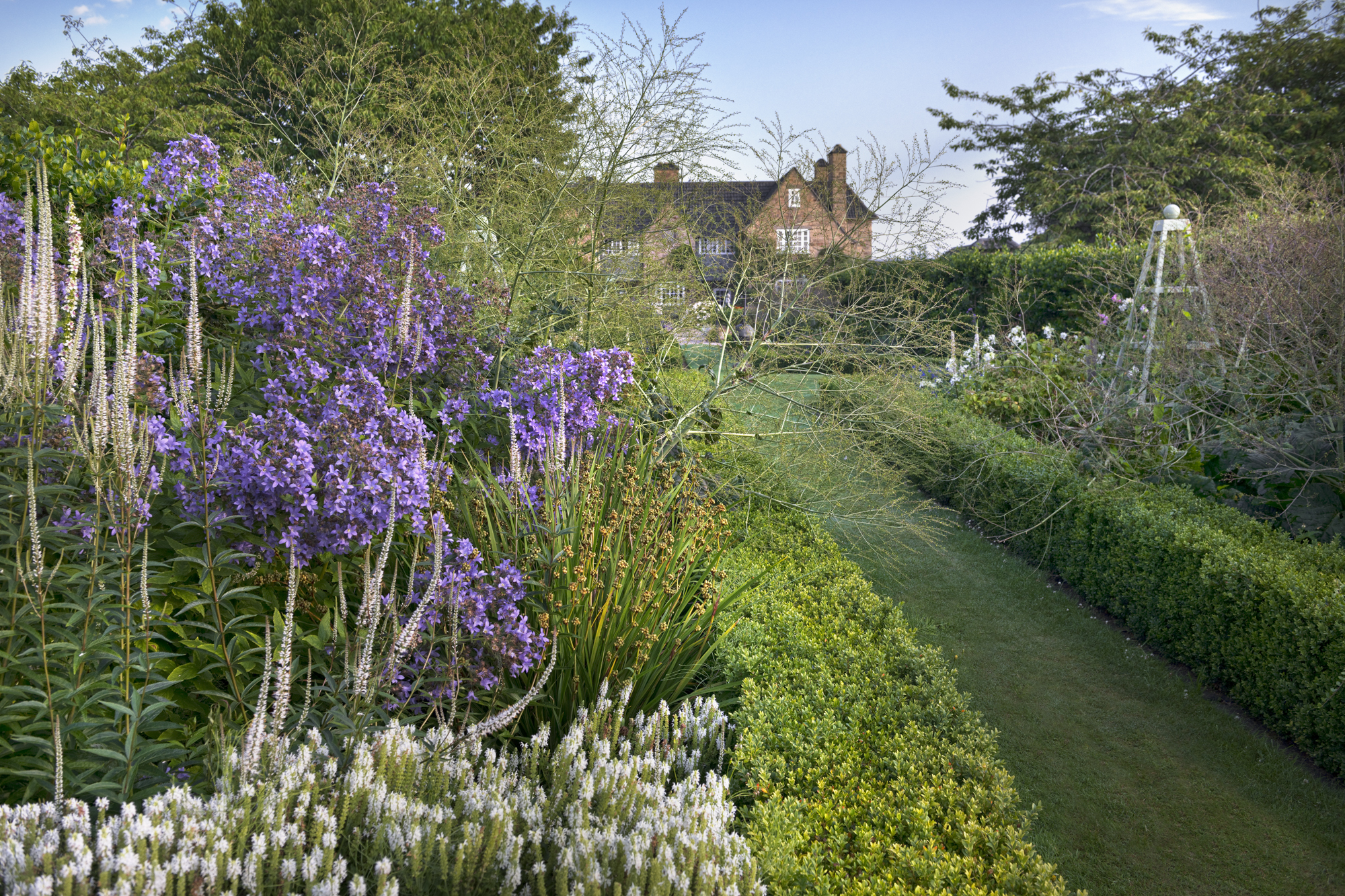 Awakening feelings of curiosity and anticipation, the delights of the main gardens at the front of the house are finally revealed through a gate from the courtyard where the main ground floor is located. The rose garden was replanted by Ursula Weaver in the 1950s to replicate Jekyll’s original design, but the roses suffered from disease and did not offer year-round color and were removed in 2001 and replaced with a mixed planting. Following Jekyll’s principles of hot colors in the center and cooler ones on the edges, the centerpieces are Clematis tangutica ‘Bill Mackenzie’ climbing espalier obelisks surrounded by the gorgeous red-flowered Helenium ‘Moerheim Beauty’ and Penstemon ‘Port Wine’ orange-flowered Rudbeckia ‘Goldsturm’ ‘ and Crocosmia ‘Lucifer’, with contrasting white flowered Paeonia ‘Duchesse de Nemours’ and Hebe rakaiensis, silvery leafed Santolina chamaecyparissus and Stachys lanata at the edges. Sculptural embellishments are added on either side by Acanthus mollis and the ornamental grass Stipa gigantea.

The central garden axis – a stone-paved path and a herbaceous grass avenue lined with grasses – runs to the extreme (southern) end of the garden, revealing the culmination of the final act – a brick clairvoyance with its elliptical ‘oeil de boeuf’ opening it offers stunning views of the Lammermuir Hills beyond, its seat sheltered under a sloping roof of gray pans. It is framed by a pair of yew trees and the pink American Pillar rose climbs the stonework. The boxy herbaceous borders of violet-blue Campanula lactiflora ‘Prichard’s Variety’, the white-flowered spikes of Veronicastrum virginicum ‘Alba’, the fragrant lavender-blue flowers of Verbena bonariensis and Salvia ‘Cambridge Blue’ are punctuated by the sculptural shapes of Crambe cordifolia with their fluffy billows out small white flowers lead the eye to clairvoyance. 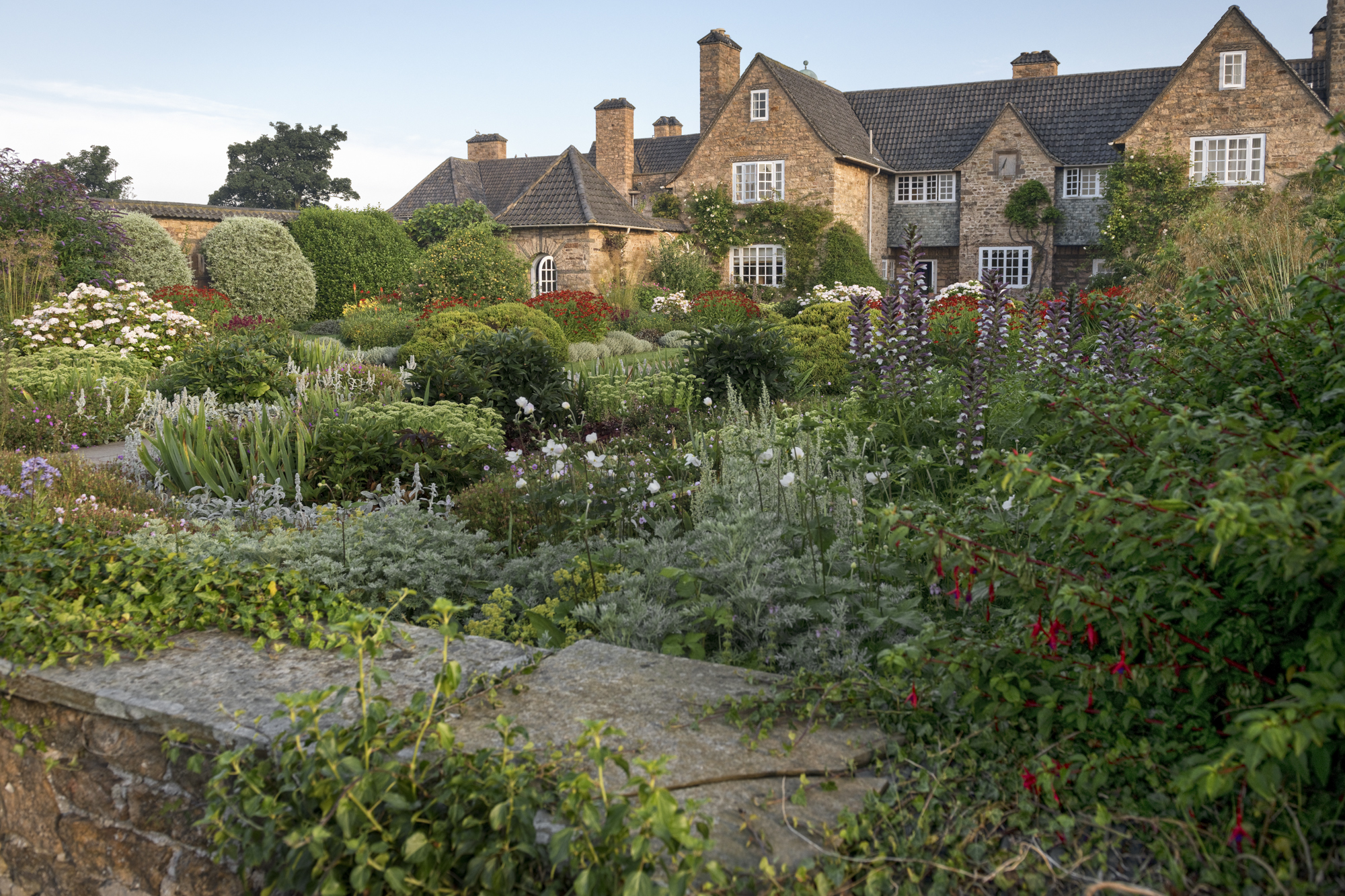 On either side of the main axis are four garden rooms hedged by holly – each enclosing a small sculpture – and until recently a mature cherry tree. However, two of these had to be dismantled and the fate of the remaining two is debated. The holly hedges have had to be heavily trimmed and there is discussion of introducing colour-matched beds in each of them with the improved lighting conditions when the remaining two trees are removed.

On the east side of the garden, the old vegetable garden is now a ‘wild garden’ with orchids, fritillaries and native wildflowers in abundance, clustered around a sundial designed by Mr Weaver. However, the nearby greenhouses are still productive; Cut flowers for the hotel and annuals for the garden.

The garden remains the responsibility of the Weaver family and has been in the capable hands of gardener Neil Davidson for the past eight years. Although they try to keep the spirit of Jekyll’s original planting, on the thin, sandy soils and with saline easterly winds that often affect early growth despite the protection of the walls, it’s always a matter of trial and error as to which plants grow successfully. But the Weaver family, keen to preserve the original spirit of the Lutyens/Jekyll garden, continues to maintain a beautiful balance of conservation and enjoyment.

The Surrey Hills are very much Lutyen and Jekyll’s territory, particularly in their first-ever collaboration at the garden designer’s home.