Taylor Swift took the stage at Nashville’s Ryman Auditorium Tuesday night to accept the Songwriter-Artist of the Decade award from the Nashville Songwriters Association International at NSAI’s annual ceremony. Naturally, in her insightful speech, the superstar focused on the songwriting portion of her creative process, revealing the three imaginary genres she thinks about when writing lyrics: Quill Lyrics, Fountain Pen Lyrics, and Glitter Gel Pen Lyrics.

In her 13-minute speech, Swift also shared with the audience the story behind the 10-minute version of “All Too Well” (before performing the full version) and her dream of “jumping through the different musical worlds of my different sonic influences. Read Swift’s full speech below.

I want to thank Bart for introducing me so generously and I want to thank the NSAI for bringing us all together for this event. To me, tonight feels full of real camaraderie between a group of people who just love making stuff. who love the craft. Who live for the rare, pure moment when a magic cloud in the form of a song idea floats down right in front of you and you just have to grab it. Then shape it like clay. Prune it like a garden. And then wish for every lucky star or pray to whatever power you believe will find its way into the world and make someone feel seen, understood, grieved for a moment or to feel connected to his heartbreak or his joy.

Through my many years in the entertainment industry, I’ve learned that this business operates with a very new, new, new, next, next, next mentality. For any artist or songwriter, we all just hope for a great year. A great album cycle. A great run on the radio. And these days, a song on TikTok goes viral. A glorious moment in the sun. Because with your next project, you’ll probably have to invent something new. Think of all the new things you can say and new ways to say them. You have to entertain people. And the fact of the matter is, we’re either amused by the emergence of new artists or by established artists showing us a new side of themselves. If we’re very, very lucky, life will say to us, “Your song is great.” The next thing life will say is, “What else can you do?”

I’m saying all of this because I’m receiving this beautiful award for a decade of work up here, and I can’t possibly explain how beautiful that feels. Because the way I see it, this is an award that celebrates a culmination of moments. Challenges. Gauntlets laid down. Albums I’m proud of. triumphs. lucky or unlucky. Loud, embarrassing mistakes and subsequent recovery from those mistakes and lessons learned. This award honors my family, my co-authors and my team. My friends and my toughest fans and my toughest critics and everyone who has come into or left my life. Because when it comes to my songwriting and my life, they are one and the same. As the great Nora Ephron once said, “Everything is a copy.”

I wrote my first song 20 years ago. I dreamed of one day jumping through the different musical worlds of my different sonic influences and transforming the production of my albums. I hoped that one day mixing genres wouldn’t be such a big deal. There are so many discussions about genres, and it usually always leads to a conversation about melody and production. But that’s possibly missing out on my favorite part of songwriting: lyrics.

And I’ve never spoken about it publicly because it’s idiotic. But I’ve also secretly established genre categories in my head for lyrics that I write. Three of them to be exact. They are affectionately titled Quill Lyrics, Fountain Pen Lyrics, and Glitter Gel Pen Lyrics. 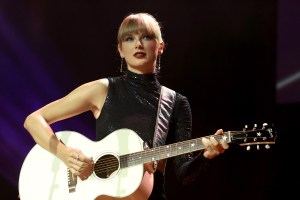 I know this sounds confusing, but I’ll try to explain. I came up with these categories based on what writing tool I imagine having in my hand when I’m figuratively doodling. I don’t actually have a pen. More. I broke it once when I was angry.

I categorize certain songs of mine as “Quill” when the words and phrases are antiquated, when I was inspired to write them after reading Charlotte Brontë or watching a movie where everyone is wearing poet’s shirts and corsets . If my lyrics sound like a letter written by Emily Dickinson’s great-grandmother while she was sewing a lace curtain, then I’m writing in the quill genre. I’ll give you an example from one of my songs that I would categorize as Quill.

“How should one know that?
I would meet you where the spirit meets the bone
In a faith-forgotten country
Your touch brought forth a glowing glow from the snow
Tarnished but so great”

Moving on to Poetry Category #2: Fountain Pen Style. I would say most of my writing falls into this category. Fountain pen style means a modern story or references with a poetic twist. Take a common phrase and turn its meaning around. Trying to paint a living picture of a situation, right down to the chipped paint on the door frame and the incense dust on the vinyl shelf. Place yourself and anyone listening right there in the room where it all happened. The love, the loss, everything. The songs I associate with this style sound like scrawled and sealed confessions in an envelope, but too brutally honest to ever ship.

“My ex-husband brought his new girlfriend; She’s like ‘Oh my God’ but I’m just gonna shake and to that guy over there with the good damn hair won’t you come over baby we can shake shake shake.”

Why did I create these categories you ask? Because I love this thing, we’re lucky enough to call a job. Writing songs is my life’s work and my hobby and my never-ending thrill. I am indescribably moved that you, my colleagues, have chosen to honor me in this way for the work I would still do if I had never been recognized for it.

Lately I’ve been on a jaunt into the past. I re-recorded my first six albums. Meticulously reconstructing every element of my past and repeating songs I wrote when I was 13, 14 and 15, this path leads me straight to the music series. How my mom picked me up from school and drove me to my co-writing sessions with dozens of authors (and some of you are in this room tonight) who 15 years ago decided to give me their time, their wisdom, their faith to give before anyone thought writing with me was a productive use of an afternoon. I will never forget you, each and every one of you.

Part of my re-recording process involved adding songs that never made it onto the original albums, but songs I didn’t want to leave behind. I went back and recorded a few of these for my version of my albums. Fearless, my version, came out last year and when I was selecting songs for it, I came across one that I wrote with the Warren brothers when I was 14. I decided to record it as a duet with the brilliant Keith Urban. When I called the Warrens to tell them I was cutting our song 17 years after we wrote it, I’ll never forget the first thing they said. “Well, I think that’s the longest hold we’ve ever had.”

In 2011, just over 10 years ago, my trusted collaborator and confidant Liz Rose came to my apartment and I showed her a song I had been working on. I was going through a rough patch (as is the natural state of a 21 year old) and had been scribbling down verse by verse by verse, a song too long to put on an album. It took about 10 minutes. We set about editing, trimming and excising large sections until it was a reasonable 5 minutes and 30 seconds. It was called “All too well”. Last year when I was re-recording my 2012 album Red, I included this 10-minute version with its original verses and added bridges. When we wrote it I never imagined that this song would come back 10 years later or that I would play it for you tonight.

But a song can defy logic or time. A good song transports you to your truest feelings and translates those feelings for you. A good song stays with you even when people or feelings don’t. Writing songs is a calling and being able to call it your career makes you very happy. That’s something to be thankful for every day, and all the people who thought your words might be worth listening to. This town is the school that taught me that.

Being honored by you means more than any genre of my lyrics could ever say.
Many Thanks.