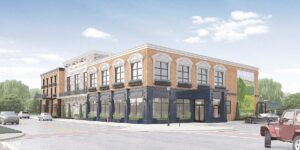 A view of the planned Garden Building. Artist rendering provided

BIG BLANK – Some exciting changes are on the horizon in the city of Grand Blanc, thanks in part to a $4.95 million grant from the Michigan Strategic Fund, and officials here say they couldn’t be happier if Years of work and planning bear fruit.

The Flint & Genesee Economic Alliance issued a press release last week announcing that the Garden Building has received a Real Estate Rehabilitation Award grant from Grand Blanc, LLC for the construction of the Garden Building adjacent to Physicians Park on Reid Road .

City Manager Wendy Jean-Buhrer said The Garden Building is “something the community has longed for for many years.”

“It’s an exciting cause that people have been asking for and we’re excited that this will be a destination for individuals from the surrounding area as well as individuals from our Grand Blanc community,” she said. “We hope it puts us on the map.”

City officials have been working with developer Erik Perkins for more than three years, Jean-Buhrer said. Perkins plans to invest approximately $11 million in the project, which will include retail space, a full-service restaurant, entertainment and events, as well as second floor office space, meeting rooms and residential units. Perhaps the most unique feature will be the year-round European-style beer garden.

Speaking to the Flint & Genesee Economic Alliance, Perkins said: “We’ve heard repeatedly that the combination of living, working and playing can work here at Grand Blanc. So development is geared towards recruiting the types of tenants that offer or operate by one or more of these principles.”

The lot on which The Garden Building will stand has been vacant since the city bought the land and demolished the houses about 20 years ago.

Although the city had not aggressively marketed the property, which consisted of three separate lots, a few developers had expressed interest over the years. However, Perkins’ plan was “the first major development proposal” that was brought to the table, Jean-Buhrer said.

“We just had to find the right investor,” she said. “We had a certain interest in it, but no sales contracts were ever concluded. It’s always been a prime property, but this is the first, the first investment group to really look at it and felt that their ideas would work and came up with a plan for it.”

“We’re excited about that,” she said. “We are delighted that Erik came to us with his ideas and are glad we were able to work together to make this a reality. We are excited.”

The Garden Building will bring a lot of energy to downtown Grand Blanc, as will neighboring projects such as McCallister’s Deli, currently under construction at Saginaw Road, and the redevelopment of the former residential building at 130 Reid Road, which will become known as the Park Boutique -Place hotel.

In addition, demolition of the former Farmer Jack store began last week to make way for the new Grand Blanc Marketplace on Saginaw and Holly streets.

“As one eyesore after another disappears, this is a wonderful opportunity and I look forward to other people seeing that Grand Blanc can be a destination and seeing more growth,” Soderstrom said. “It’s wonderful. I couldn’t be more excited.”

Grand Blanc Chamber of Commerce President Leigh LaForest is also optimistic that The Garden Building will inspire more growth and positive change in the community.

“Hopefully this is an indication that new businesses are interested in downtown and want to come here,” LaForest said.

She added that Grand Blanc is a prime location for business because it is “a good thoroughfare” between major metropolitan areas in Genesee and Oakland counties.

“We are very fortunate that many developments are happening at the same time,” she said. “It’s exciting to drive down Saginaw Street, through the township and city, and to see so many things happening. It’s encouraging. That means people want to get back to work and grow and invest in the communities where they live and work.”

LaForest said the uniqueness of the beer garden and the inclusion of residential units is “exactly what Grand Blanc needs.”

“It’s going to be very cool,” she said. “I think it’s a great mix. It will add to the uniqueness of the city… and it will create a real downtown.”

Soderstrom credited Jean-Buhrer with her efforts to help Perkins realize his vision.

“He had a vision and pursued it,” she said. “He was persistent. We have worked diligently with him over the last few years. Kudos to him and to Wendy for all their work in helping him apply for the scholarship and making sure everything went right.”

The Michigan Strategic Fund is administered under the auspices of the MEDC.

“It takes a lot of work and trust from the MEDC to bring in a $5 million grant,” said Jean-Buhrer.

Construction of the Garden Building could begin as early as this winter, with completion expected to take up to 24 months. The development will create about 75 jobs.

“The next few years are going to be eye-opening,” Soderstrom said. “We have people dedicated to this community and that’s wonderful to see. These people are investing… I welcome them all with open arms. For people to be excited to come to Grand Blanc… oh my, that’s going to look amazing.”