The Conrad Mansion Museum has partnered with the Flathead Valley New Horizons Band for their September 22 Fairy Walk in the Garden.

During the museum’s Fairy Walks, people of all ages are invited to find fairy houses amidst the flowers and trees of the manor’s gardens and experience the magic of the Conrad Mansion.

This Thursday, September 22, from 6-7 p.m., the Flathead Valley New Horizons Band — the community band playing for the Conrad Mansion Museum’s July 4th ice cream socials — will play family-friendly songs that kids will enjoy during the walk in the garden. Everyone is welcome to picnic, enjoy the music and explore the gardens while keeping an eye out for the elusive fairy houses. This is a free event and all ages are welcome. Donations are welcome and all proceeds benefit the Conrad Mansion.

“The gardens are always open to the community,” said museum director Brit Clark. “We want people and especially children to spend time here and stimulate their imaginations.”

She added that growing up, the mansion sparked her own lifelong love of history.

Alicia Conrad, the youngest child of Kalispell’s founder Charles E. Conrad and his wife Alicia D. Conrad, believed in fairies, or at least was fascinated by them. She wanted the flowers and plants in the garden to grow tall and untrimmed so the fairies would not be disturbed and could build their magical houses without being seen.

“The walks also tie into the Victorian era’s fascination with fairies,” Clark said.

Some say on magical evenings the fairy houses only appear for a few hours. Others are said to have seen strings of lights from the gardens.

“That’s when they really come alive,” she said, adding that it’s also a time when people are often out and about in the community.

A highly intelligent and spirited youngest Conrad, Alicia lived most of her life in the family mansion.

In 1914, at the age of 22, she married Walter McCutcheon, an employee of the Kalispell Mercantile Co. Timmie, their only child, was born in 1921 in Portland. The couple divorced in 1924.

Alicia’s second marriage was to George Henry Campbell of Great Falls, a Yale engineering graduate who joined his father in starting a land management company in central Montana. They had one son, Charles “Joni” Campbell. The couple remained together until his death 45 years later.

Timmie moved to the Conrad Mansion with her mother, stepfather and brother in 1933 during the Depression at the age of 12. Throughout the 20th century, Alicia managed to save her family home and collection. It remained her primary residence until she donated it to the town of Kalispell in 1974. The following year it was listed on the National Register of Historic Places.

The Historic Conrad Mansion Museum is located at 330 Woodland Ave. in Kalispell. The museum’s regular tour season runs from May 15th to October 15th. Visit www.conradmansion.com or call 406-755-2166 for more information and event information.

Since spring 2019, Joni Hanson has maintained and beautified the gardens of the Conrad Mansion Museum.

She comes from the Bibler Gardens, where she was trained.

“We have a good relationship with the people at Bibler Gardens and she was recommended to us,” said museum director Brit Clark. “We are very grateful for all their help and support.

“Joni does a great job and she’s a very hard worker,” Clark said. “She understands how important the Conrad Mansion is to the community and our city’s history, and that is reflected in her care of the gardens. She adds fun and creativity to them and is always ready to talk to visitors. In many ways, she is the face of the organization.” 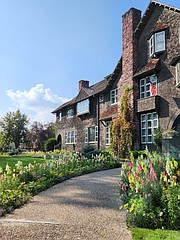 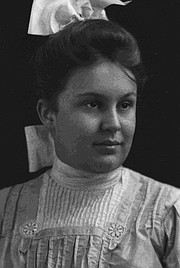