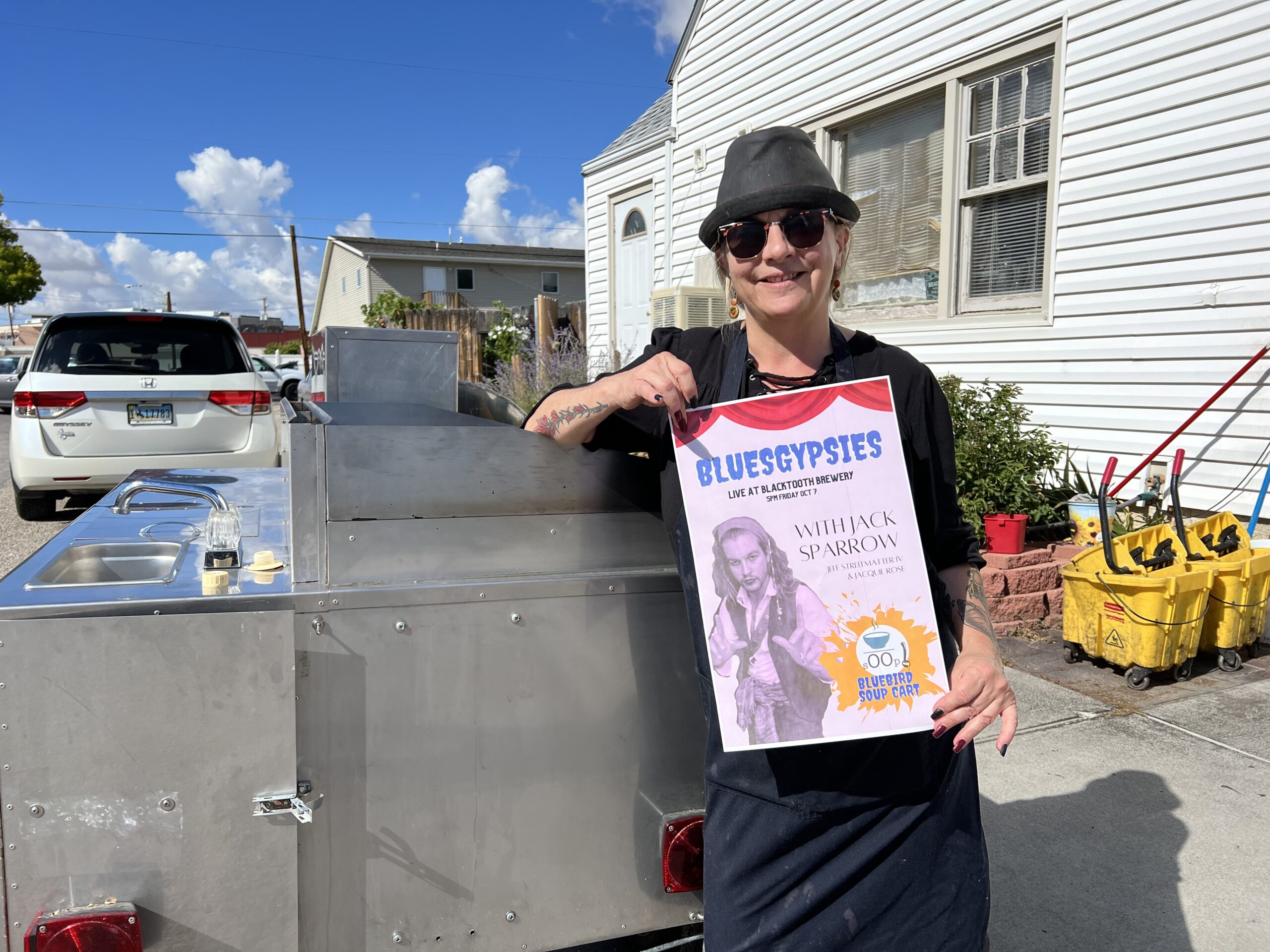 Jacquie Anderson, owner of Bluebird at the Cheese Barrel, plans to launch a new “sOOp” wagon with a performance of “Bluesgypsies” outside Black Tooth Brewery on Friday. (Brendan LaChance, Oil City)

CASPER, Wyo – The Bluebird at the Cheese Barrel is seeking a new liquor restaurant license, and the owner is also poised to launch several other new offerings in Casper, including a new “sOOp” mobile cart and new music with a duo called “Bluesgypsies”. .”

The Bluebird at 544 S. Center St. serves breakfast, brunch and lunch and is also available for private parties, owner Jacquie Anderson said Tuesday. Securing a restaurant liquor license to serve beer, wine, Bloody Marys and mimosas would complement breakfast and brunch offerings, and the proceeds would help pay the bills.

“During all this COVID and stuff, I think we were actually the first restaurant to open,” Anderson said. “So, you know, we always ran into a lot of obstacles, didn’t have a lot of cushion. This gives us the opportunity to have that cushion.”

The Bloody Marys Bluebird plans to offer will include some pickled beans and asparagus sourced from a farm that the restaurant sources vegetables from in Wellington, Colorado, Anderson noted. The Bluebird also plans to rely on Backwards Distilling Co. for things like vodka for the Bloody Marys.

“I’m going to try to keep it as local as possible,” Anderson said. “Keep it simple.”

Since opening during the pandemic, Bluebird has been working to complete the transformation of the old Cheese Barrel restaurant, and Anderson said she thinks the menu is now dialed in and the restaurant is getting a lot of great feedback from customers.

The Bluebird at the Cheese Barrel hosts some music events related to ARTCORE. In addition to the new music venue options, a restaurant alcohol license will round out the offerings as the Bluebird works to offer specialty fondue nights, multi-course dinner nights and things like business aperitif parties, Anderson said.

“And then, of course, a lot of my friends are musicians, so they want to play the acoustic sets there,” Anderson added, noting that she thinks the restaurant’s liquor license will help in hosting events like this.

Anderson, who is a musician herself, is working with a friend named Jeff Streitmatter IV to launch her new “sOOp” cart concept. The duo dub themselves “Bluesgypsies” and while Streitmatter performs as Jack Sparrow in front of Black Tooth Brewing, 322 S. David St. on Friday, October 7 at 7pm, Anderson will be serving food from the new “sOOp” truck.

Anderson plans to park the soup cart outside near places like David Street Station and the Natrona County Courthouse to give people another dining option. She plans to be outside on Fridays and Saturdays to brave the cold and keep the soup truck running through the winter.

Anderson and Streitmatter also plan to use some busking infrastructure at David Street Station to share their “Bluesgypsies” music and may be out on Saturday.

“It’s a little bit of everything,” Anderson said of the music. “He and I are both performance artists and that’s the name of my old band 27 years ago from my friend Thomas Frech who passed away and ran the music store Platte River Music. That was our name back then, so we’re revitalizing the name.”

Both Anderson and Streitmatter will sing and play keyboards and will perform a number of duets. Anderson has also spoken to a friend who dances about potentially incorporating dance into some of the Bluesgypsies performances.

Businesses with a liquor restaurant license must have a special serving area approved by the city council and restricted to those 18 and older.

Any restaurant that prepares meals for on-site consumption is eligible to apply for a restaurant alcohol license. Restaurants with restaurant liquor sales must derive at least 60% of their sales from food. For more information on the various alcohol licenses in Casper and the rules, contact the City of Casper.

If the city council approves Bluebird’s liquor license application, the city will receive a prorated license fee of $726, according to a city officials memo. Bluebird’s memo and application can be viewed below: